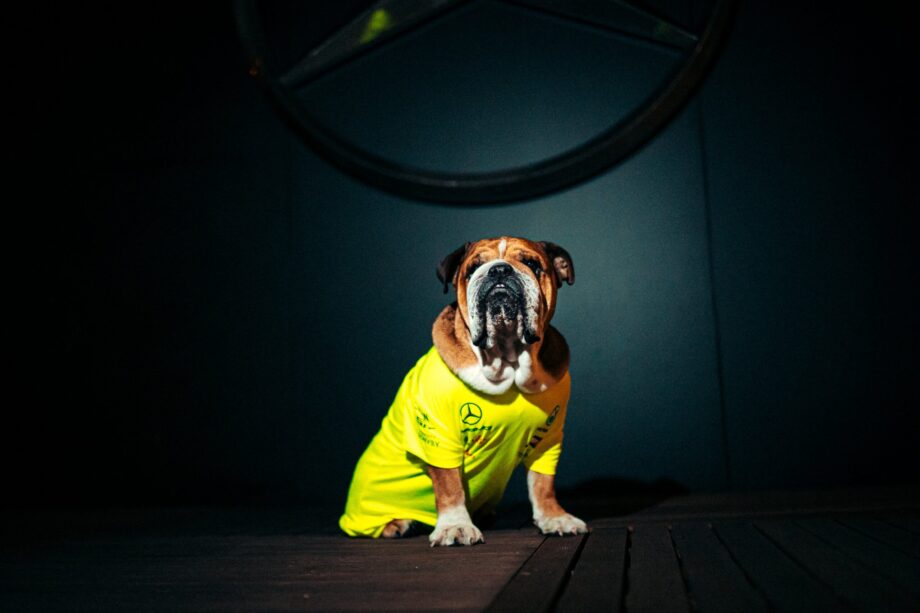 Lewis Hamilton can often be seen with his beloved bulldog Roscoe by his side. But how much do we know about Roscoe? Well, here are five interesting facts about him!

1. Roscoe joined the Hamilton family in 2013

Lewis got Roscoe in 2013 and, later that year, Roscoe was joined in the Hamilton household by a female British Bulldog – Coco. Lewis announced the newest addition to his family on social media.

“He’s my new best buddy, I grew up with dogs around me,” Lewis wrote.

“My mum has five dogs and my dad too. I’ve always wanted dogs and never had the opportunity so I went for it.

“I’ve got him a passport and he’s going to travel around with me, I’ve asked Bernie [Ecclestone, Formula 1’s boss at the time] for a pass and fingers-crossed he’ll give me one.”

Well, Bernie obviously gave the ok as Roscoe (and Coco) were seen at many races since then. Sadly, in 2020 Coco died of a heart attack.

Since January 2015 Roscoe and Coco have shared a joint Instagram account showing off their fun (and sometimes luxurious) lifestyle. After Coco’s passing the account now continues to feature Roscoe’s adventures.

3. Roscoe earns $700 a day from his modelling gigs

Since 2018 Roscoe has been a model and, according to Lewis, has been earning $700 a day from his modelling gigs.

“Roscoe is now part of a modelling agency and he has auditions, he will go up against ten or 15 different bulldogs, they will need a bulldog for a product,” Lewis explained.

Both of Roscoe’s parents were champion show dogs, so his career shouldn’t come as a surprise.

4. Roscoe is a vegan

In 2020 Roscoe has converted to a fully vegan diet. Lewis listed several health benefits Roscoe experienced after the switch.

“This is Roscoe, I’ve had him for eight years now,” Lewis wrote on Instagram.

“He ate normal dog food all of his life, as well as food with meat in it. His breathing has always been bad. [It] meant he was never able to walk very far and his joints would hurt. He also had skin allergies.

“Three months ago, I decided to transition him to a vegan diet. It has changed his life. He now doesn’t have any breathing issues. His throat is no longer restricted, and he doesn’t overheat like he did before and he loves to run. He also has no allergy issues.

“He’s like a puppy again! It’s been amazing to see these changes in Roscoe and I’m so grateful to be able to share this.”

Although some have questioned if it’s healthy for a dog to follow a vegan diet, animal rights charity PETA said it is completely fine, provided there’s ‘right planning and care’.

“Dogs require two amino acids, L-carnitine and taurine, which are usually added to vegan dog foods or can be added as supplements,” PETA said.

“Many vegan dogs enjoy excellent health. One remarkable example is that of Bramble, a 27-year-old border collie whose vegan diet of rice, lentils, and organic vegetables earned her consideration by the Guinness Book of World Records as the world’s oldest living dog in 2002.”

5. Lewis intends to get ‘more Roscoes’ in the future

Unfortunately, due to health issues, in 2016 Roscoe had to be snipped. However, Lewis had his sperm frozen so he can have his pups in the future.

“Due to some complications, we had to have him snipped. However, since he’s the best looking bulldog I decided to freeze his sperm so that in time to come I could have his pups.

“He is the best pedigree. Both mum and father were champion show dogs so it’s great his gene will live on.”

On F1’s Beyond the Grid podcast Lewis went into more details about the reasons behind this.

“The reason I had to get him snipped, is because the poor guy would wake up randomly and he would ejaculate everywhere.

“He would get scared and wouldn’t know what happened. It was so funny, but it was bad as it was everywhere.

“So he had to get the snip, but I can’t not breed this boy, he is so handsome and has the kindest heart.

“At some stage we will get some puppies, so probably once when I retire from racing and have a family, I am definitely getting more Roscoes,” Lewis concluded.

So, there you have it, not only are we going to enjoy seeing Roscoe at the track for years to come, we are surely going to be seeing his offspring as well!