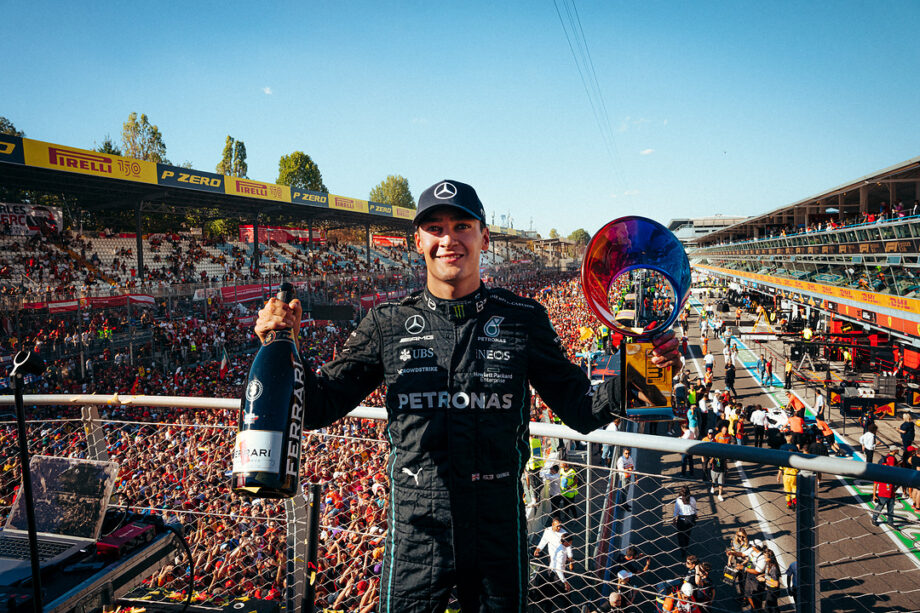 Q: George. Congratulations, yet another podium for you and a really solid drive. You must be really satisfied with that?

George RUSSELL: Yeah, thank you. I think I said on the radio to the team, it doesn’t matter if we’re fast or slow, we keep getting these podiums. Unfortunately, this weekend we definitely weren’t where we wanted to be as a team but nevertheless we can look back on these three races – two podiums and a P4. We’ve got to be satisfied with that.

Q: You put the Hard tyres on and somehow you made them work. They weren’t ideal today.

GR: I mean, we had to do something different if we wanted to fight with Max and Charles, but unfortunately they were just too quick for us today. I’m pleased that we tried something, that’s what we have to do in the position we are at the moment.

Q: You’re proudly wearing the Union flag of course. It’s been a time of great sadness and reflection back in the UK and all around the world indeed after the death of Her Majesty Queen Elizabeth II.

GR: Absolutely. It’s an incredibly sad time around the world and for the British people, but what a life and a life that should be celebrated.

Q: George, coming to you now, your seventh podium of the season. What were your expectations coming into the race?

GR: I think how Max and Red Bull performed were kind-of in-line with our expectations, especially ahead of the weekend. But I think Ferrari, and Charles especially, surprised us a bit with how strong they performed. I thought we maybe had half a chance to battle with Charles today, but he showed some really strong pace. And it was just quite a long and lonely race to be honest. Our car certainly wasn’t performing at its best around this circuit. I think we have a good idea why that is, and sort-of happy that these low downforce, high-speed circuits are behind us now.

Q: You talk about battling Charles. You were side by side going into Turn 1. It got pretty tight…

GR: Yeah! Got pretty tight! What was that quote, was it Montoya said in Imola, 2004? “If you couldn’t see me there on the outside…”

Chares LECLERC: I don’t know – but in the last race it was pretty tight with you too!

CL: I didn’t see him, with these new cars it’s difficult!

GR: Charles had the inside line, and he had the right to push me a bit wide. So, that was the most exciting part of my race, to be honest.

Q: You said a moment ago, that you think you understand why the car performed as it did. Can I ask you about its performance on the Hard tyre? And would you take that compound again?

GR: Probably not, no, to be honest. But I think, to be fair to the whole of our team, we weren’t really planning on using the Hard and we didn’t think it was a fantastic tyre. But we just felt like we had to do something different to Max and Charles. If we stayed on the Medium, if we did Soft-Medium as they planned, we were going to finish behind them. So, it was a risk worth taking. But being on a Medium, it wouldn’t have transformed the race either.

Q: Were you worried about Carlos at the end of the race?

GR: No, not at all, to be honest. I think we have that pretty well covered.

Q: And we go to a very different track next. Do you think Singapore will offer Mercedes an opportunity?

GR: More so than we’ve seen here, there’s no doubt about it. I think, on paper, Singapore should suit our car – but when we look back at the street circuits of Monaco and Azerbaijan, our car doesn’t fare too well over the bumps. So, we’re not too sure how it will fall out. But we need to keep on pushing, keep on improving the car and I’m pleased that we’ve got a clear direction we need to go now.

QUESTIONS FROM THE FLOOR

Q: (Matt Kew – Autosport) Question to both Max and Charles? Can I just get your thoughts on the safety car procedure at the end? Charles, I’m assuming you wanted to fight Max. Max, was there any part of you that wished it had been clear air, so you could have had a sprint right at the end?

MV: Yeah – but from what I understood, was that the car was stuck in gear and that’s why it took so long . Because, of course, when the car’s parked there, there is no gap where you can push the car into, compared to some other places. And that’s why the crane had to come. And that’s why I guess they just run out of time. So, I guess it was very unfortunate. Normally, I think everyone wants to finish under green flag. But yeah, unfortunately, we were just short of laps. But I mean, I had a new Soft as well so I was not too worried. I mean, even if it was one lap shootout.

CL: Yeah, obviously I really wanted for this race to start again. But yeah, I mean, from the car, I didn’t understand because the last time we passed through, the track was clean. So, I really thought that we will restart again. But it didn’t happen. So maybe there are things in the background that I didn’t know that didn’t make the restart possible.

Q: George, can we just get your thoughts on this as well?

GR: It’s just racing, I think. It’s obviously not always easy when the car stops in an awkward place. We always want to end a race under green flag but you know, what can you do? It’s just how the game goes. And I don’t know what the race picture looked like but I don’t think it would have changed the result, either way. What is clear though, is these one-stop races, minimal tyre deg, they don’t seem to offer that much of an exciting race – but I don’t know, I haven’t obviously seen what the race was like behind us.

Q: (Ronald Vording – motorsport.com) To Max and George:  both of you know Nyck de Vries quite well. Today he made his Formula 1, debut finished P9 so got some points. I don’t think you’ve seen too much of it in the car but what do you make of that performance? And does it show that he deserves a full time spot on this grid?

GR: Yeah, he obviously did an excellent job and yeah, impressive. Throughout all of our karting career – the three of us race against him – knew him well, and he was always one of the very best and there’s no doubt he’s deserve another place in Formula 1. So that’s just how the sport is. Sometimes, you know, there’s 20 drivers, not everybody gets an opportunity but certainly now he’s proved everything he has to.

Q: (Niharika Ghorpade – Sportskeeda) Do you think the safety car rules that are there need tweaking after what has been seen?

GR: Yeah, the same.  You can’t extend the race. Following Abu Dhabi, we had some discussions about races ending under the safety car. I think we looked at every single race since ’98 and it happened 10 times. Maybe  that’s wrong, don’t quote me on that but maybe it’s worth looking at. But you can’t extend the race without enough so it’s just how it is.

Q: (Aaron Dekkers – Racing News 365) Max, I would like to ask another question on Nyck de Vries. Yesterday we had contact with him and he just told us that he even couldn’t sleep last night he was so nervous. George was it reminiscent of Bahrain 2020?  Is what Nyck was going through this weekend your experiences with Mercedes?

GR:I think probably tougher for him to be honest than it was for me because I was obviously a full time race driver then and equally as well for him jumping from Aston Martin on Friday into a Williams; it’s a different car,  the seating position is different. I remember when I was doing testing with Mercedes, Force India at the time and driving F2 it took quite a few laps just to get used to the different feeling of how those cars reacted. As I said, there’s not a lot more to say;  to score points on your debut in a Williams, it’s pretty spectacular no doubt.