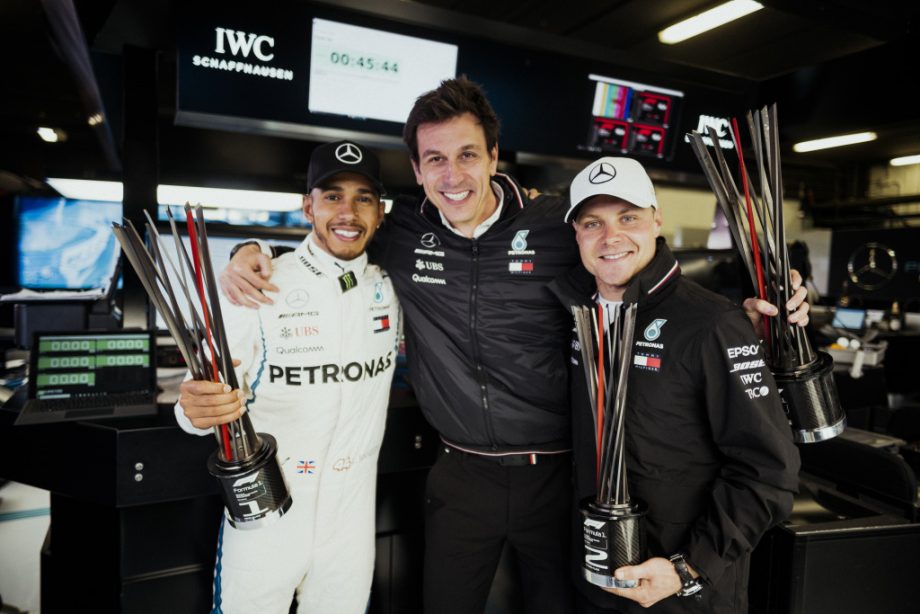 This week Mercedes confirmed that Valtteri Bottas‘ contract has been extended until the end of 2021, however Lewis Hamilton is yet to agree to a new deal.

Hamilton’s contract with Mercedes expires at the end of 2020, but he says he “doesn’t feel it’s the right time” to discuss a new deal.

“Ultimately, honestly, it just doesn’t feel like the right time,” said the Briton at the Thursday press conference.

“When you think about so many people in the world that have lost their jobs, people that are unemployed, then to sit and negotiate a big contract – it just doesn’t seem like the most important thing that I need to apply time to right this second.

“The fact is I do want to continue with the team and it’s not a big effort for us to sit down and get it done. It’s just right now I don’t feel comfortable with it, and so we’ll wait a little bit longer.

“I’m not talking to anybody else and I’m looking forward to continue on, particularly as we’ve just started a new chapter as a team, in terms of how we educate ourselves, how we understand what we’re going to do to help be more diverse moving forwards and more inclusive.

“So I’m super-excited for what it’s possible to do with Mercedes-Benz and this time moving forward. At some stage it will get done but I’m not stressed.”

“I think consistency is always a good thing for a team, and Valtteri has had such a positive influence on the team over these five years.

“He’s trustworthy and does an incredible job on the track and is a great team mate to all the people within the team so I think it’s a tribute to all the hard work he’s done,” concluded the six-time champion.

Speaking of Bottas, the Finn is happy with how his contract negotiations went.

“I think everything went pretty smooth this time,” Bottas.

“Obviously it’s special circumstances and we kind of agreed before we knew how the season was going to be that we would hopefully get something done by, let’s say, June.

“But of course we didn’t race even before June, so we just said let’s wait and see, let’s focus on the first few races and eventually speak.

“Then it just came really naturally and it wasn’t really that tricky. We could agree things pretty easily and smoothly and there was no outside distraction either, so it was good. It definitely didn’t hurt my performance at any of these first few races.

“It was not on my mind, so that’s how it should be done,” concluded the Finn.

At the Friday press conference Mercedes team principal Toto Wolff was asked about the financial terms that need to be discussed when talking about Lewis Hamilton’s contract extension, more precisely, if Mercedes expects the Briton to take a pay cut.

“This is a very direct question, which I don’t want to comment [upon],“ said Wolff.

“Lewis has been a very important part of the team. We recognise his driving ability, his behaviour and culture within the team, we enjoy his global presence, we respect his opinion on the various topics that are close to his heart and if you look at the impact that he has on Formula 1, not only with him driving exceptionally, he was always worth the expectations in terms of salary, which we respect.

“Now, the world has changed a lot. We face difficult times and all that. And Lewis completely understands that and we will discuss what that means.

“I don’t want to lay out financial terms here because it’s truly a matter only between Lewis and I and as we have both expressed we will continue to race with each other – best driver and best team – and come to a solution in whatever amount of time.”

Ultimately when asked if Mercedes was “in a hurry“ to sign Hamilton, Wolff replied: “We will eventually sit down somewhere, carve it out in a few hours, and go for pizza – like we did last time.”

Wolff was then asked why Valtteri Bottas only got a one year extension.

“In 2022 the regulations change. We love our current line-up, we respect the two, and we need to be open and flexible and see what happens beyond that.

“It doesn’t mean that we haven’t got any trust in either Valtteri or Lewis but it’s just important to have the option to look at the movements in the whole driver market,” concluded the Austrian.