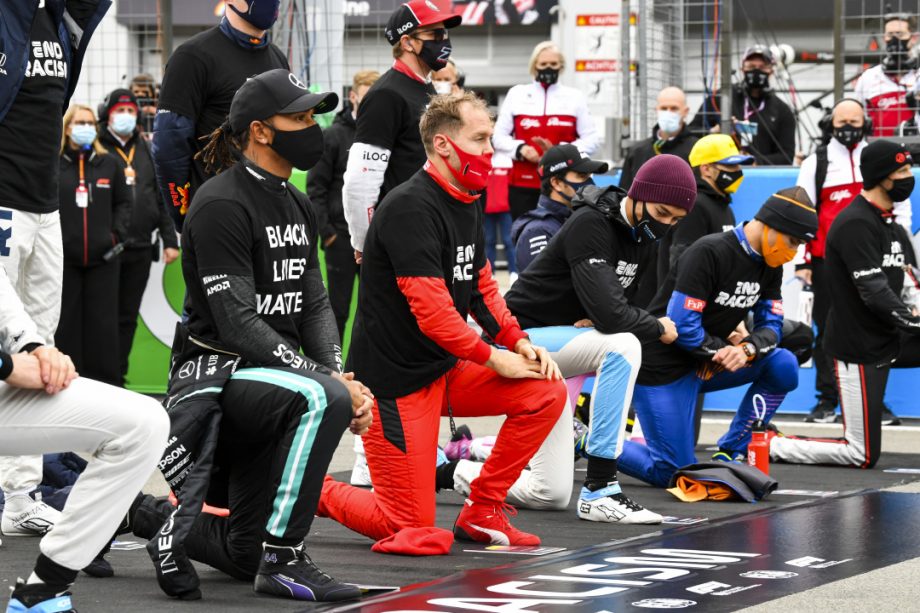 Lewis Hamilton explains his activism work with the Black Lives Matter movement and his desire to leave a lasting impact.

Lewis Hamilton has many interests outside of Formula 1, but recently his activism regarding issues of racial injustice came to the forefront. The Briton explains why he decided to use his platform to facilitate change.

“You want to look back and say I was a part of something much bigger than myself, than my team, than the sport,” said Hamilton to Sky Sports F1.

“And I did it with a whole group of people and a lot of force against us, but also a lot of force because there was many of us pushing in the same direction”

Hamilton has been a leader when it comes to pushing Formula 1 to tackle issues of racial injustice. He was the one who fought to include the ‘taking the knee’ gesture in the pre-race ceremony and the one who prompted Mercedes to change their livery to an all-black design, as a sign of solidarity with the fight for equality.

“If I stop talking about it, if I stop taking a knee at the forefront, at the pinnacle of motorsport, if I stop wearing this mask [with the inscription “Black Lives Matter”] reminding that this is still an issue, then it will just go back to normal and this will be in 10, 20 years the same layout that it’s always been.

“And the access for minorities and people coming up will still be the same. I want to be a part of the solution, shifting it for the future.

“For me, it was like OK, we’ve got to make this stand, we’ve got to make your voice heard. Because I’m winning all of these races, but it doesn’t actually mean anything unless you do something with the platform that it then provides you.

“I think all these years I’ve been… I feel like things happen for a reason in some ways and I think all of us are probably looking for what our purpose is and for me, I’ve been winning these races and succeeding and wondering, what does it all mean?

“What am I going to do with this? And this came round this year and I’m really, really proud, grateful to be a part of the big fight that everyone out there is fighting for.”

Hamilton says watching the video of the killing of George Floyd by a white police officer “brought a lot of emotion that I had suppressed since the age of five”.

“Honestly, it was really easy for me, because that’s just how I’ve always been since I was a kid. I’ve never been afraid of standing up for what I believe.

“Whilst at times in my life I’ve been pushed to keep my mouth shut, I don’t think that inspires anyone and that doesn’t inspire progress.

“For me, when I felt those emotions, I don’t want my niece and nephew to feel what I feel, as mixed-race kids, growing up.

“We just have to continue with it, we have to keep going. It’s like anything out there, the news happens and then it just dies a quiet death and we can’t allow that to happen.”

Back in July the six-time champion started the Hamilton Commission, tasked with increasing the number of black people in motorsport.

“What I notice is, it’s not something you can just change over time. It’s not about firing people and swapping them for people of colour – it’s not about that. It’s really understanding what the barriers are.

“I’ve got an amazing group of people that are on this commission. Some are in politics, some are on the ground in black communities, some are in education. At the end of the day, it does come down to education.

“The goal is not to do something short-term, it’s about setting something up and providing a recommendation for these different businesses, these companies that are here, in how they can go about improving the diversity within their own organisations.”

Lewis’ battle is fully supported by Mercedes, who have also embarked on a quest of increasing diversity in motorsport.

“It has been great to see the response, particularly from Mercedes. I’m most impressed with [them] out of the whole sport. Naturally you can say that’s because I’m there with them, and we’ve had very difficult conversations.

“Formula 1 also has said they’re open to move forwards. The goal at the end is to have a sport that represents the outer world, which in my opinion it currently doesn’t.

“It’s not like that I have not spoken about it before, the lack of diversity within my sport. But it’s never been heard. No one has ever listened. No one has ever cared to do anything about it, do the research.

“And I thought me being here would be enough and hopefully inspire some kids coming up, but it is an expensive sport.

“When I talk about diversity, I’m not talking about drivers. That’s probably the last part of the end of the straw.

“It’s all the other great jobs and opportunities there are here,” concluded the Briton.

You can listen to Lewis talk about this and more in a programme called “Lewis Hamilton: My Race” that will air on Sky Sports News at 9.30am GMT and then throughout the day on the channel.

The 25-minute interview will also air on Sky Sports F1 and Main Event over the weekend, and be available to watch on Sky Sports On Demand and YouTube.